One of the first things you need to pursue when starting a business is to have a webshop, either Shopify, BigCommerce, Magento, or others to display your products and services. However, choosing the right platform is never an easy decision, especially when you’re short of budget.

In this Shopify and BigCommerce comparison review, we put the two leading eCommerce platforms head to head so that you have sufficient information to determine which is more suitable for your business.

What do Shopify and BigCommerce do exactly?

In short, Shopify and BigCommerce are Software as a Service (SaaS) tools. They are website builders that allow you to sell your products – both physical and digital – online. The key idea behind this is that you can build your own website without the need to write a single code. You can rather choose a pre-built template, upload your products, fill up your prices and you’re good to go. In order to maintain your presence, you have to pay an ongoing fee – either monthly or annually – to the platform provider.

Even though you don’t need to involve a programmer or web designer when building a Shopify and BigCommerce store, it would be a plus point to have a good eye for design and clear images of your products.

Now let us go into detail about the differences between these platforms.

Shopify offers a range of 5 plans, compared to 4 of BigCommerce. Shopify ranges from $9 to $299 per month while for BigCommerce, this figure is between $29.95 to $299.95 for the same period. However, the cheapest Shopify Lite doesn’t really provide an online store. The only feature is to embed a Shopify button to add a shopping cart to an existing website.

One reason why these two plans worth a closer look is that they’re most widely used among first-time users.

Both plans allow for an unlimited number of products. However, BigCommerce Standard seems to outweigh its counterpart by having some features that Shopify doesn’t have any equivalent, namely:

Especially regarding the rating and review system, Shopify does not have this function pre-embedded for any of its plans. You’ll need to use a separate app to handle this. Fortunately, they did provide a free rating app called Product Review. Apart from it, you can install a wide range of third-party apps for rating and reviewing functions, many of which have more advanced features than Shopify’s Product Review.

Although BigCommerce generally provides a lot with its $29 plan, Shopify Basic still has 2 important edges over its competitor.

First, Shopify doesn’t institute any sales limit, whereas, for BigCommerce, there’s a limit of $50.000 for an account using the Standard plan.

Second, Shopify offers an abandoned cart saver system allowing for automatic reminders sent to customers after 1, 6, 10, or 24 hours later. Meanwhile, this is only available for the BigCommerce plan of $79.95 and up. 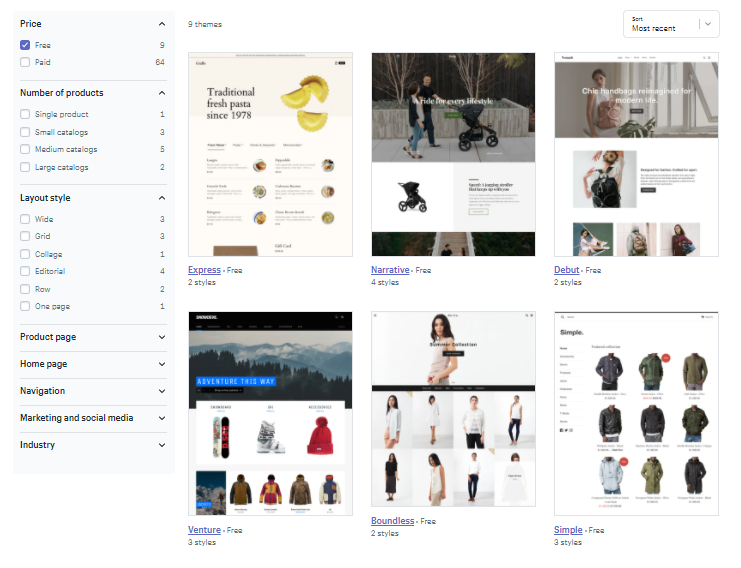 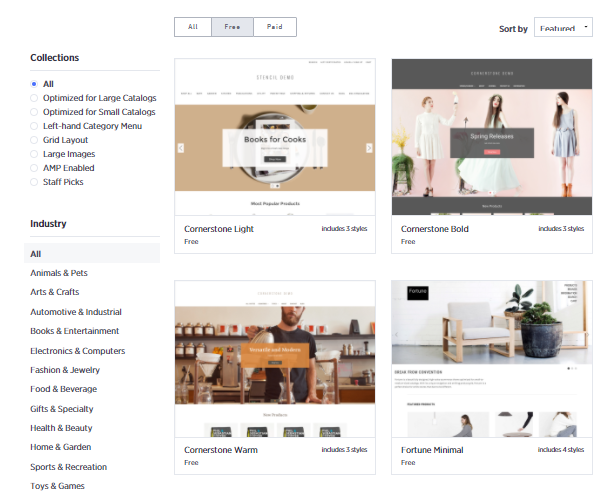 Regarding the free template, both platforms offer a selection of themes to choose from 9 in the case of Shopify and 12 for BigCommerce.

Within these, there are different styles (variants) and elements that you can add to your template. Thus they give you more choices in design than the above number might initially suggest.

However, Shopify themes differ from each other in a more significant way. Several BigCommerce templates are variances of the same family whose only difference is in the main color. So instead of 12 themes as claimed, it looks like there are approximately 5 or 6 distinctive templates.

Yet the BigCommerce drag-and-drop builder with more free elements makes it easier for users to customize their website.

Apart from the abovementioned free templates, you can always buy premium themes from Shopify and BigCommerce.

BigCommerce has a gallery of 150 paid templates whose price ranges from $150 to $300. Occasionally they discount some of its paid themes. So if you’re best of luck, you might get a stunning design at a cheap price.

Even though Shopify has a fairly smaller number of paid-for templates, 64 themes compared to that of BigCommerce, their price is more reasonable, ranging from $140 to $180. Also, Shopify imposes a variety of filters allowing users to make a choice based on not only industry type but also design style.

But don’t forget: if you’re still unsatisfied with the template, you can always customize it the way you like.

Related Posts:  How Can Customers Buy More Goods Than Available On BigCommerce?

When it comes to the transaction fee, there’re some vivid differences on the floor.

One plus point for BigCommerce is that there is no transaction fee applied for any of it plan regardless of your payment gateways. Whereas for Shopify, this number varies from 0.5 to 2% based on the size of the order. The only exception is when you make use of the Shopify payment system. However, this functionality is available in a number of countries, which means that if you’re not based in one of these, you will have to use a local gateway and pay the transaction fee for Shopify.

Credit card fee is another key issue to consider. There is always a fee charged by the company providing the system to process your customer’s credit card payment. Fortunately, both Shopify and Bigcommerce offer out-of-the-box ideas for store owners to optimize their budget.

The ‘Shopify Payment’ processor charges users differently based on whether you’re selling online or in person, the country you live in, the plan you are on, etc. Meanwhile, BigCommerce recommends credit card payment via its partner – Paypal, whose fee is around 2.2 to 2.9% depends on the plan.

This makes the credit card fee for BigCommerce a little bit cheaper than Shopify, especially when extensive plans are taken into account. Store owners selling a low volume of goods might not see the difference there, but merchants with high demands will certainly do.

Shopify apps store includes more than 1000 apps. Their prices range from being free to around $200 per month excluding the Shopify plan. Furthermore, Shopify default functionality only allows for 3 sets of options per product – for example, size, color, or materials. It is very easy to set up your own store, but it becomes frustrating when you sell a product that has more than 3 versions. 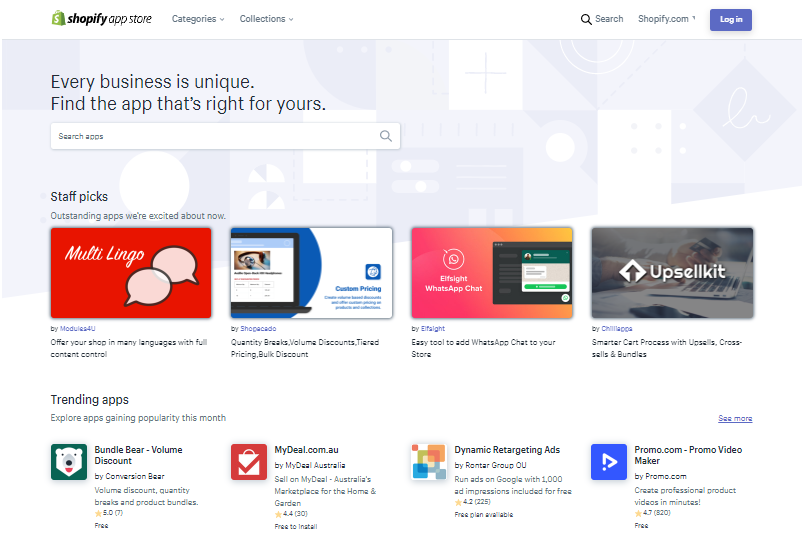 Still, Shopify outperforms its competitors by having a smart categories functionality in which not only can you manually add products to your collection but you can also create ones that will automatically populate the products based on your supply.

Despite lacking these features, BigCommerce has the advantage of containing a lot of built-in features for sales so that there’s no need to worry about having to install tons of third-party apps. What’s more, BigCommerce allows you to create a large list of products – up to 250 categories. Thus if your products come in all versions, you would find more flexibility with BigCommerce. 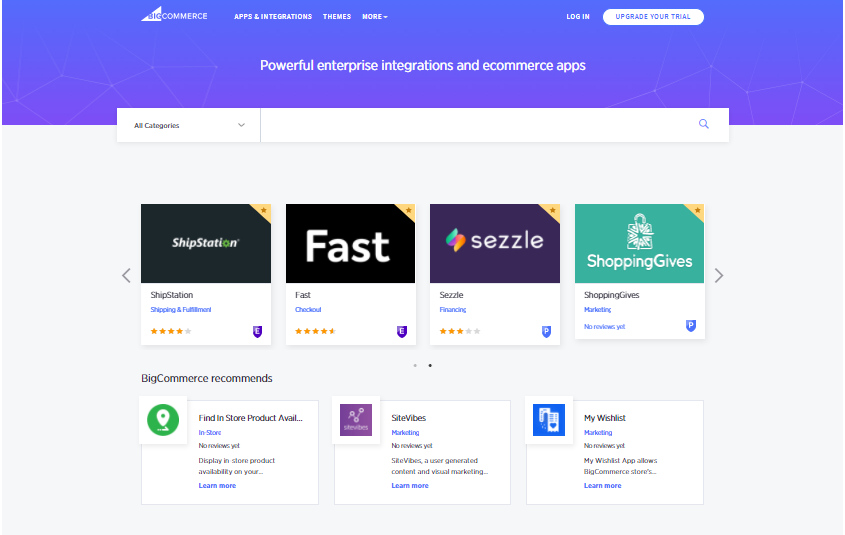 You typically get more online sales if you communicate with your site visitors in their language and sell in their currency.

So, if you are selling in multiple countries, it is a good idea to let your customers choose their language and currency.

To a certain extent, Shopify lets you do this quickly and simply with two free templates named Debut and Brooklyn. However, if none of these is of your interest, you will have to add some code to your website to enable selector. An even more helpful tool is the automatic currency conversion embedded in the Shopify Plus plan. It uses the IP address to sort out visitor locations and present relevant currency. You can also integrate this into your website using a third-party app.

Furthermore, Shopify allows you to translate your site into 5 languages – unless you’re using Shopify plus, in which case the number is 20. It is noteworthy that some elements such as product and blog tags are currently untranslatable. But again, you have the freedom to choose a 3P app that enables you to switch languages much easier.

On the other hand, the IP feature is employed in all BigCommerce free templates. However, if you’re using a paid theme, then as with Shopify,  you need to install a 3P app instead (Bold Multi-Currency is a good choice).

In terms of languages, BigCommerce partner up with Weglot to provide its users with 100+ languages with automatic translation. Along with this, store owners will need to pay at least an additional $21 per month for the Weglot app.

So which is better?

All in all, there’s no ultimately better choice between Shopify and BigCommerce. They’re big competitors and whatever platform you choose, you’re sure to receive stellar service. The more rational question to ask is which is more suitable for your business.

You can choose Shopify if…

You can choose BigCommerce if… 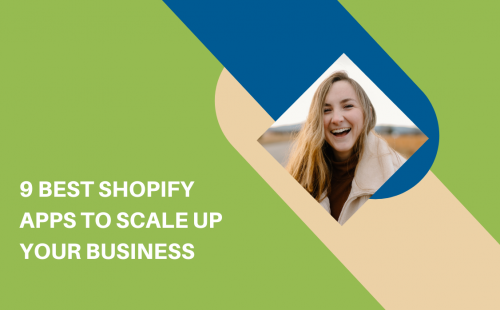 9 Best Automation Apps For Shopify Stores
As an entrepreneur, you are too busy with getting the task done on time. And there’s only that many hours a day. Thus, the only… 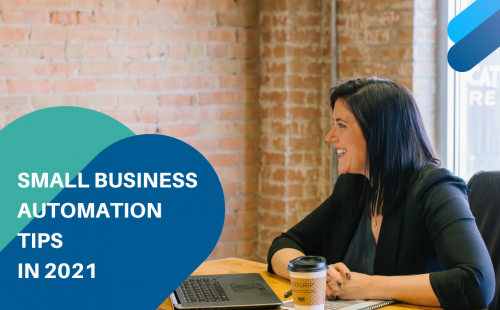 Small Business Automation Tips in 2021
COVID-19, despite all of its detrimental impacts, has signaled a positive trend within the eCommerce market with the witnessed growth of 4 to 6 years… 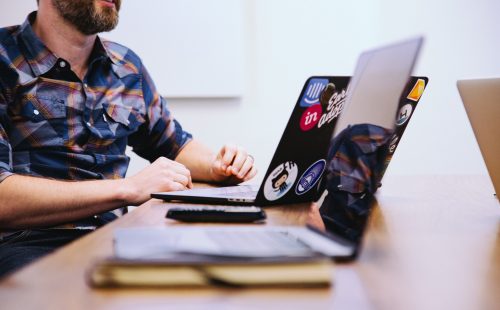 4 Small Business Challenges Every Merchant Should Know
Like training for a marathon or mastering the art of making croissants from scratch, running a small business requires lots of effort. From the beginning,…